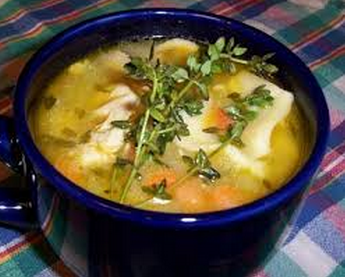 Here’s how it boosts your immune system?

So what exactly does chicken soup or chicken bones have to offer?

Chicken contains an amino acid called cysteine, a substance released when you make the soup. This amino acid is similar to the drug acetylcystein. This drug is prescribed to patients by doctors with bronchitis because it breaks down proteins found in mucous that settles in the lungs.

Cysteine can be found in proteins throughout the body and when used as a supplement it is usually in the form is N-acetyl-L-cysteine (NAC). Here’s the best part, cysteine converts to glutathione, a super powerful antioxidant!

Glutathione benefits include living longer, living better, better sports performance, slow aging and increased energy. Glutathione (GSH) is also made naturally by our body. It is our body’s master antioxidant and detoxifier. This time of year during the so called “flu season” give yourself an immune boost with the by increasing consumption of bone broth or stock. Glutathione is a potent antioxidant, protecting fatty tissues from the damaging effects of free radicals.

In addition, glutathione also plays a vital role in the detoxification of harmful substances by the liver and can chelate (attach to) heavy metals such as lead, mercury, and cadmium. It is also glutathione carries nutrients to lymphocytes and phagocytes, important immune system cells.

Vitamins like vitamin C and Vitamin E become unstable after they have neutralized free radicals. Glutathione’s role is to stabilize the vitamins that allow them to do their job again and again. While the other antioxidants work only at a certain part of our body, Glutathione is needed in every part of the human body. Its deficiency makes the other antioxidants ineffective in fighting free radicals.

Glutathione also is highly anti-inflammatory. As free radicals are produced in the cells due to intake of oxygen for energy production, Glutathione must immediately get rid of the free radicals. This prevents cellular inflammation. Almost every disease is linked to INFLAMMATION. The first step towards disease prevention is to control inflammation in our body.

Bone stock (chicken or beef) contains minerals in a form the body can absorb easily—not just calcium but also magnesium, phosphorus, silicon, sulphur and trace minerals. It contains the broken down material from cartilage and tendons–stuff like chondroitin sulphate, glucosamine, and hyaluronic acid. You don’t have to spend the big bucks on expensive joint supplements either. You can make it easy. Here is a great way to make it one of my patients shared with me: